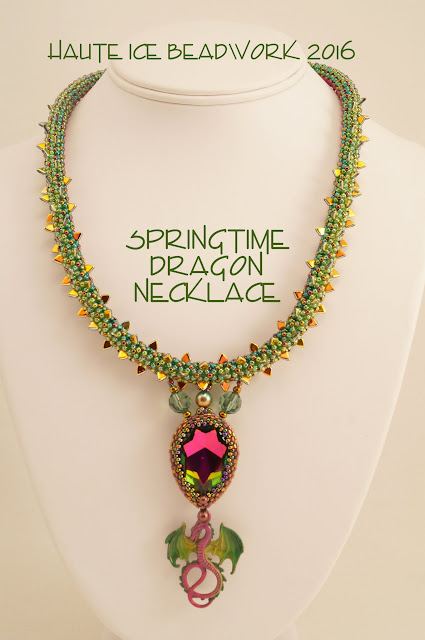 There is a new Dragon kit in my Etsy shop.  Meet Springtime Dragon.  I think they are all girls.
You can name your own yourself.  Maybe, for you, it's a boy dragon. :)

Last year, I started playing with the idea of using gradation in Chenille stitch.  I also decided to try working a series of similar pieces, instead of bouncing around at will, as I usually do.  So I made friends with dragons, and dragon scale beads, and the idea of multiple colorways.  It was kind of a quest for mastery of an idea.  I began with gradation that ran vertically around the cord. 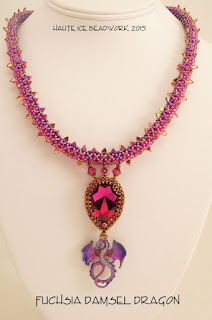 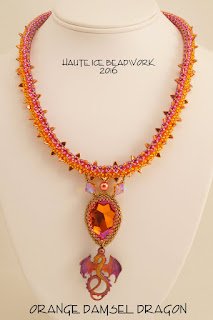 I did the fuchsia one first, with a Fuchsia jewel, and a pink to purple rope ombre.

Then I used a Crystal Astral Pink jewel, and used color from the jewel for my ombre. from gold, through pumpkin to pink.  I gifted that one to a dear longtime beading friend.
Because she liked it.  :) 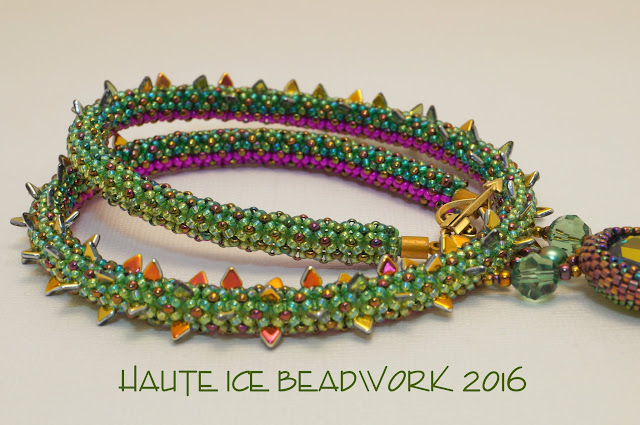 To better explain the ombre gradation, I have laid the rope on its side.  The outside edge of the rope is chartreuse, which deepens across the top to a middle value and then to a dark forest green on the inside.  And since I was thinking of writing tutorials, I gave this third version a fuchsia "belly" because I knew it would be easier for students to see mistakes in the pattern if there was a bold reference point.  I think there is some mastery to be had with repetition. 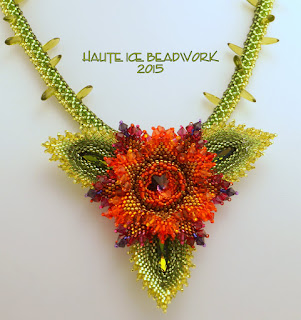 Here's a similar ombre, from "Second Hand Rose" which I have other plans for.

Then I worked with spiraling the ombre around the rope, and that too, is a tutorial in my Etsy shop. 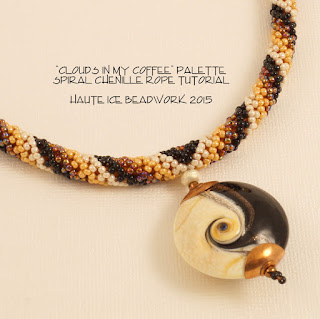 And I did a couple dragons with that gradation as kits. The Volcano sold out really fast, and two of the Chili Pepper are still available in my shop. 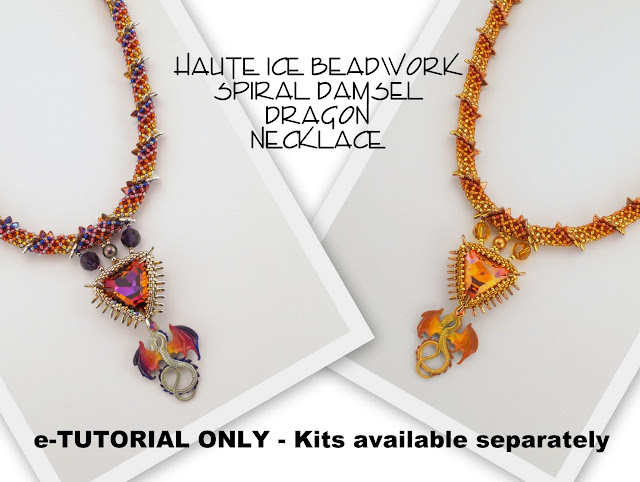 I think Springtime is the last Dragon kit I will do.  How many dragons might people want to bead?? 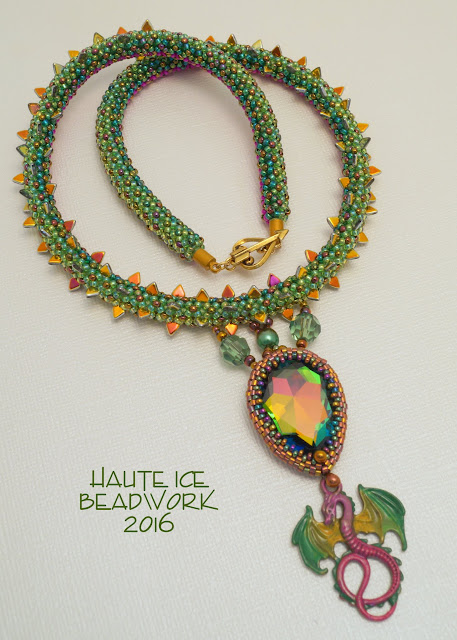 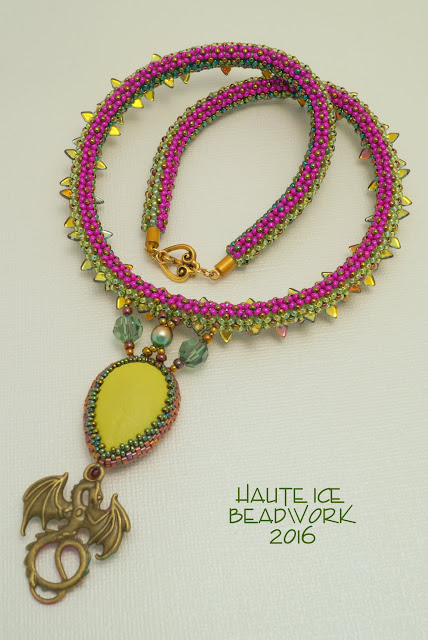 I think she (or maybe yours would be a he?) would be fun to wear for Valentine's Day, or St. Paddys, or maybe even Easter!  For sure the vernal equinox!  The project takes about 10-12 hours, (intermediate level with a knowledge of Peyote required and the ability to follow a chart) so there is plenty of time if you get started right away, lol.

But I have a couple other dragons to show, and if this is the end of dragons for me, now is the time. 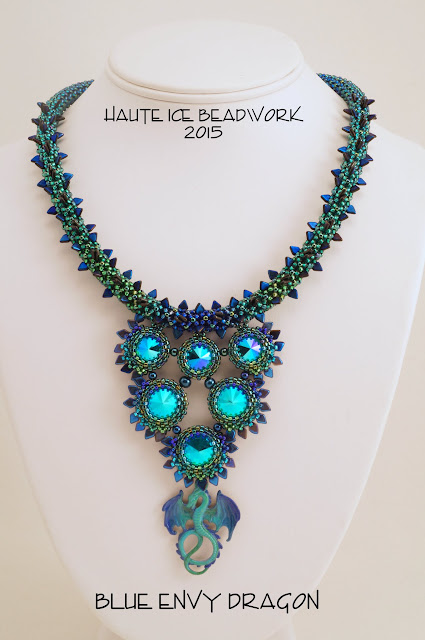 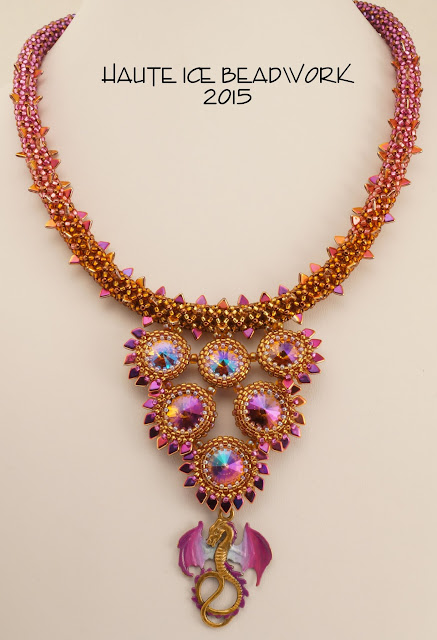 Expect more gradation.  It is one of my favorite things to do.  And I love Chenille, so meditative.
But if you want a dragon, now is the time. 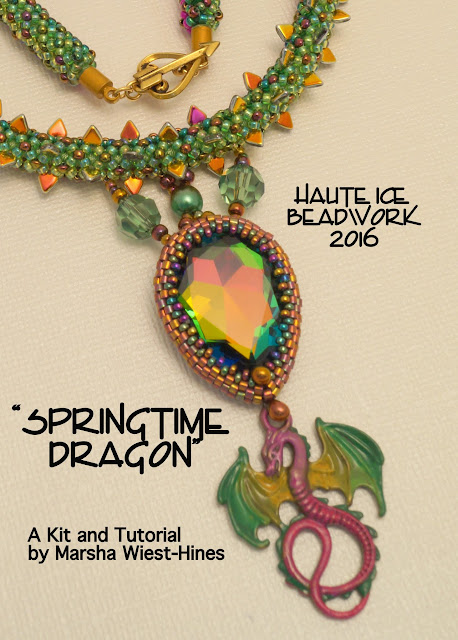 Find her in my Etsy Shop here!

A Dark and Twisted Salute to Alan Rickman

I am too busy.  I am sick with a nasty cold/ sinus infection/ bronchitis.  And although I thought I had a great idea for Bead Dreams, my first component took forever and I only liked it.  I have to be in love to work that hard.  And the deadline is way, way too early this year for my schedule.

So, I gave up, and let me fingers wander as they chose.

And then Alan Rickman died.  And the rope Slithered in my fingers.  And the darkness of the cab seemed right.  So it became a little tribute to an actor and character I loved.  Nothing super special, but a good little dialog to have with my beads. 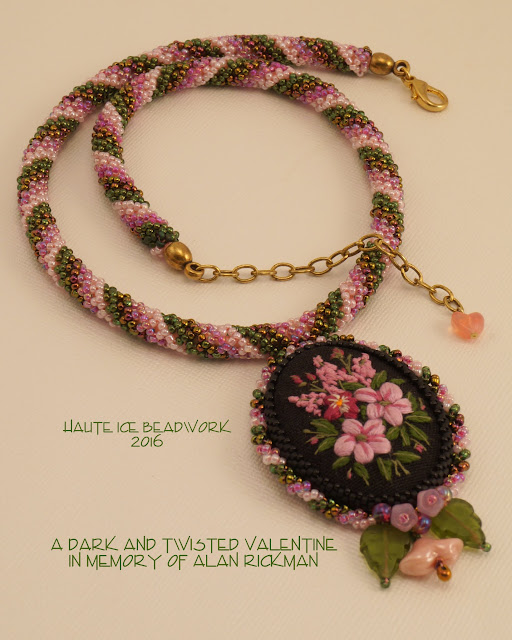 I was kind of addicted to my spiral chenille stitch last fall, so it popped up, this time, worked over a 3mm leather cord, to which I added my own brass end caps. Plus I wanted something snakey with a hint of green.  I don't really like silver, so I just ignored that bit. 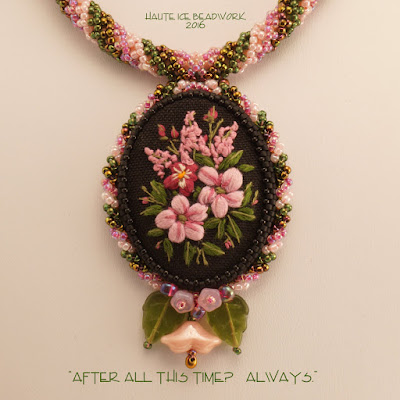 And I added a little twist to the bezel, and a few bits of flower, leaf, and bud, because it is very cold and white and barren here, and I miss the growing things.  And flowers are often gifts for the dead. 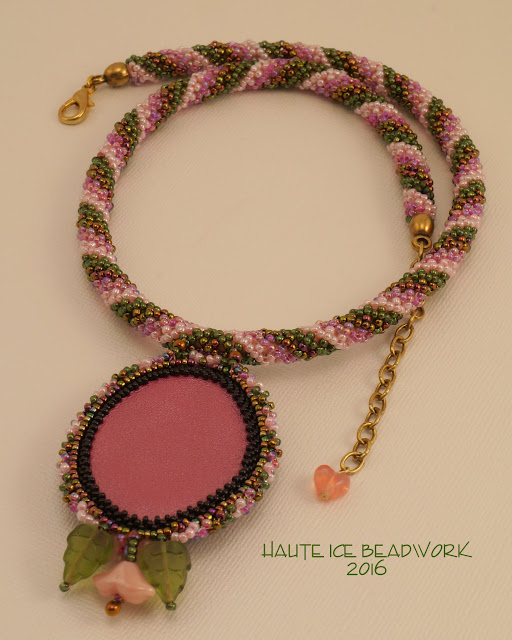 It would have been very sensible to do "real" bead embroidery here, but I just couldn't bring myself to do that.  I am a weaver first, and when seeking comfort, I revert to form.  The little cab was cardboard backed, so I did add a little leather.

Do you recognize the line?  "After all this time?"  Dumbledore says it to Snape, about his love for Lily Evans.  Snape calls forth his Patronus, a symbol of protection and support.  It is a doe, like Lily's own Patronus. And he replies "Always."  And Alan Rickman delivers that line in what some believe to be an anticlimactic fashion.  But I admired the delivery.  It was a simple statement.  An "of course".  Because that is what love is.  I think the actor understood that.  He married his high school sweetheart, his love of 50 years, before he died.  Because love is not contingent on reciprocity, or what a partner might have to offer, or the circumstances of a relationship.
It is because of who two people are.  And it is forever.