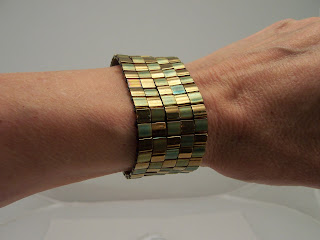 I took a class on Sunday, a rare event for me, being as paraniod as I am about copyright infringement.  Usually, I avoid classes, (along with more than cursory glances at beading magazines) because it means having a door opened that I feel I dare not ever walk through for fear of being accused of "STEALING!!!"   Sigh.  But this class was designed by someone who teaches people how to teach classes, and whose work as a teacher I deeply admire, Diane Fitzgerald.  And it seems to me that she is always presenting technique, as well as a design, which to my way of thinking is what a beading class should be: beautifully presented technique, with a possible take-home outcome, for those who do not design for themselves.

In this case, when I looked at the class material, the techniques were square stitch and herringbone.  WOO HOO!  I have never done square stitch and only rarely used herringbone.  Something about the texture of the herringbone stitch seems rough to me, and although I sometimes think, "hmmm... herringbone is probably the right solution to this problem," I only rarely move past the sample stage with it. But maybe Diane would offer a new perspective or improve my technique with the stitch sufficiently to make it more usable for me.  Plus, Diane's class focused on a new bead from Miyuki, the two-holed Tila.  I signed up, thrilled at the idea of an introduction to a new bead, having a new stitch to play with, and a new piece of jewelry to wear by the end of the day.  I so rarely make things just for me, it seemed almost decadent! 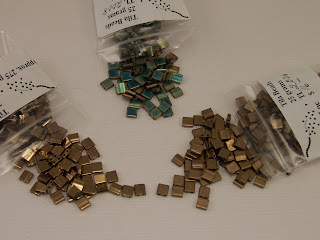 When class began, Diane demonstrated square stitch and showed us a lovely collection of possible Tila bead projects and a good selection of Tila beads to choose from.  I loved a necklace project, made in the square stitch.  It required increasing and decreasing, so I set out first to make a sample doing that in a regular way, to confirm that it would not overwhelm me.  I realized after several increases and decreases (which I creatively improvised) that I was not really understanding the stitch, and at about the same time, Diane suggested we should perhaps all begin with a simple bracelet or straight sample.  Yes, mam!
I started on a bracelet, and the comprehension of the stitch fell neatly into my mind and hands.  Because I tend to keep my head down and bead, rather than chatting, and because I have the smallest wrist I have ever measured in my lifetime of measurement-taking as a dressmaker, I finished a bracelet. The Tila beads are BIG, compared to my usual 11's and 15's so the speed of visible progress is a really fun change.  Diane had a selection of clasps from Claspgarten, a German company, and sold me a magically perfect slide clasp for my bracelet. 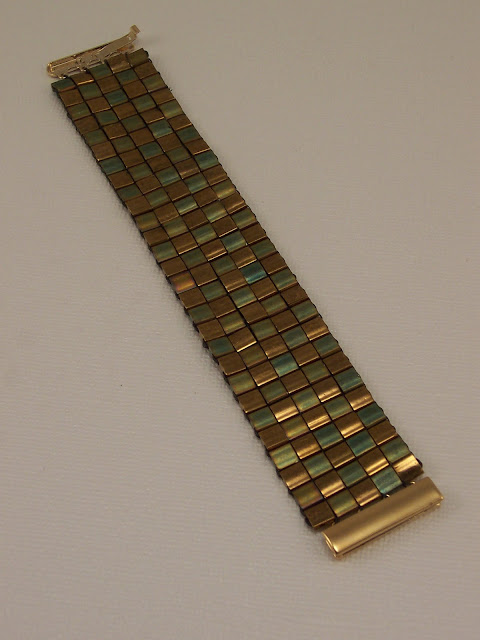 Later in the day, we worked with herringbone stitch and combined other beads with the Tilas.  I have not yet finished my herringbone project.  I am working on another piece that has been taking my full limited-beading-time-per-day at the moment, but I am feeling a little pull toward finishing the herringbone necklace today...  so we'll see what happens when I pick up my needle tonight.

In the mean time, Diane, thank you for a lovely and fruitful day!
Posted by Marsha Wiest-Hines at Monday, October 11, 2010