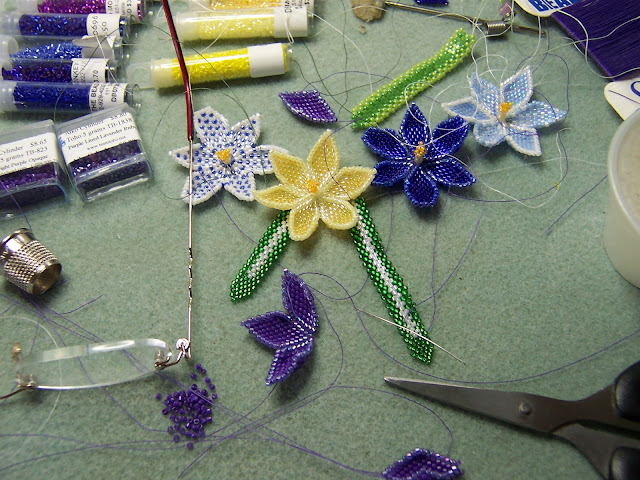 When the Etsy Beadweavers "Seed Beads Only" challenge was announced, I thought it might be nice opportunity to make beaded flowers, something I usually enjoy.  I began with researching crocus on google images and found the variety of colors and shapes appealing, so decided to make several different colored and shaped versions to replicate one particularly appealing image, from Dutch Mill Bulbs.

The range of colors ran from white through yellow to blue, purple, and even magenta. There were also lovely stripey patterns and beautiful ombre's. They all had six petals, but some were pointy, some more blunt, and opened from tightly closed to gently cupped with age.

I simplified a little to try to avoid visual confusion. And finally after a number of test petals, selected five I liked, and got the flowers finished, complete with upright stamen and pistils.   Most of the plants had delicate grasslike leaves and those were my biggest struggle.  I tried some peyote ones that I could cup a little with bead choice and thread tension, but they looked like bandaids to me.  Drat!  :o) 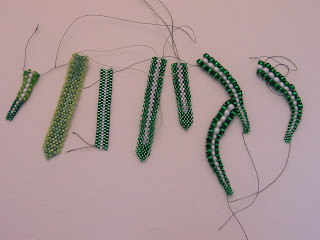 Then I turned the peyote sideways and did a double needle odd count technique, with beads in 4 sizes.  This did not have the same structural merit as the little bandaids, but did pleasantly reflect the size and shape of the leaves.

The white center stripe was also clean and clear with this technique, and I could create curves, but they required support.  So, enter the bead backing.  I created each leaf and then stitched it to the bead backing.  I decided the spiky quality of the leaf structure didn't really want to be other than straight, so ditched the curve potential.  I placed the leaves in what I hoped was a randomly balanced  pattern, and trimmed away the backing as I went. 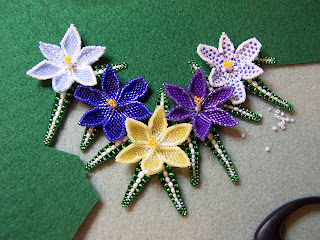 Then I went on a hunt for something soft and comfortable to back the bead backing with, and a means to apply the backing without widening the leaves with the traditionaly quilled edge beads. I asked my friend Kinga Nichols (beauteous bead embroiderer!) a million questions about leather, adhesives, and stitches which she patiently answered. I found a beautiful piece of "super softy pigskin" in a deep green, and know I will re-visit Tandy Leather in Roseville to buy more in other colors some day.  I tried buttonhole and blanket stitches without an edge bead, but finally decided that the best finish was the quilling.  I quilled with both size 11 and 15 beads, and kept my shape reasonably well with only a small amount of additional width.  I thought the leaves looked like tiny crocodiles from the sides, with their two rows of scary tooth beads! 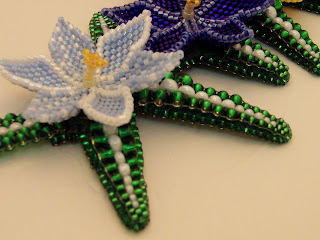 This finished product is certainly organic in feeling, different from my usual precise and more formal results, but a happy little piece, and certainly a nice harbinger of Spring. 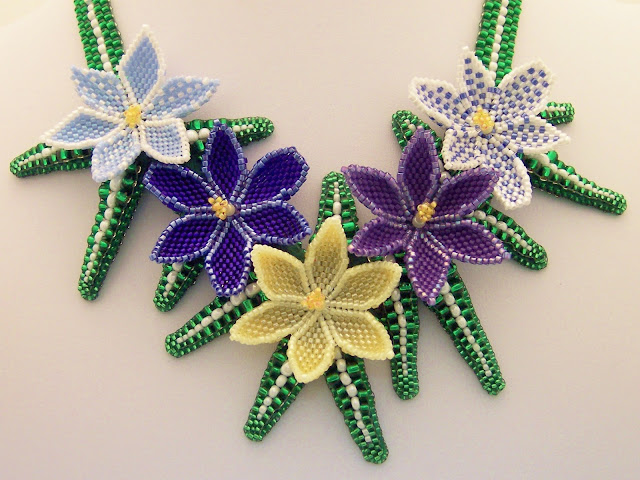