I had such a lovely afternoon!  The Upper Midwest Bead Society 25th Anniversary celebration was held in Eden Prairie, in a pavilion in an Autumn-colored woods, with huge glass windows. 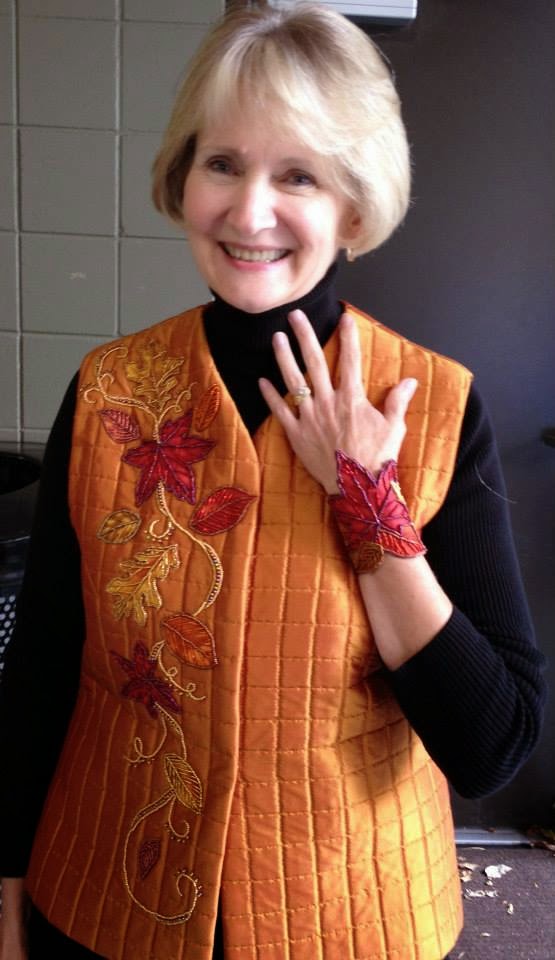 I stepped through the door, to find my friend Jean Erickson, visiting for the occasion from her new home in the Southwest, and it was great to see her!  I really miss beading with her before meetings.

She took my picture.  I SHOULD have taken hers!  I got to wear my new beaded vest and cuff and while I was pleased, I also learned loads about where I want to go with these ideas.

I also saw my friend Ann Gilbert, who was one of my first beading teachers at the original Bead Monkey, and I was honored to sit between her and the founding mother of the society, Diane Fitzgerald. Besides being a delightful lunch companion, Diane wore a FABULOUS long beaded sleeveless coat, which was to die for!  We were served ribbon sandwiches, which had such a vintage flair that I thought my mother could have made them.  Layers of pimento, egg salad and your choice of tuna, chicken or ham salad.  Delicious! 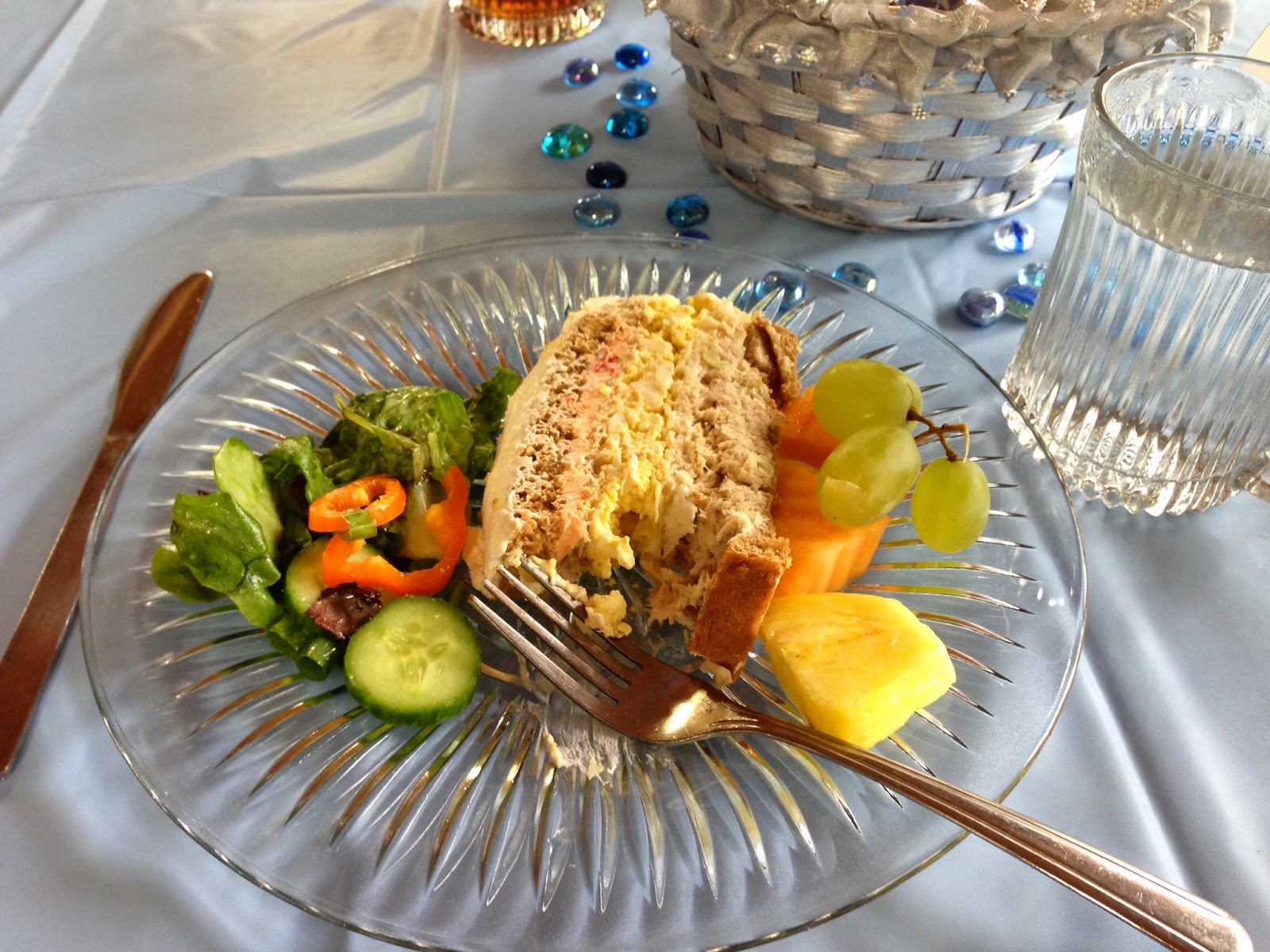 Society President Nancy Miller talked about what life was like back in 1989, without the internet. She showed us a beading book from the period which was printed in black and white, was spiral bound, and had four pages of color pictures. Diane then talked about how she single-handedly created a group of beaders over the course of five years.  This was before e-mail and facebook, so she announced meetings with hand written postcards.  Wow, what energy and determination she had!


Glass artist Jeff Barber created a special limited edition anniversary bead, and there was a friendly contest to use the bead in a creation of your choice.  There were a range of entries, from jewelry to a stained glass creation to hang in a window.

The event was judged by Jean Campbell, and my friend Jean Erickson took second place with a wonderful necklace with included micro macrame. The imagery reminds me of Diane's "Finger's in my Pocket Dolls", but in this case, the fingers are in plain view!
Another friend, and my very first teacher, Barb Knoche, won first place with this glorious, reversible necklace.
Jeff also chose his favorite entry and it was Barb's piece as well!  Here's the other side. 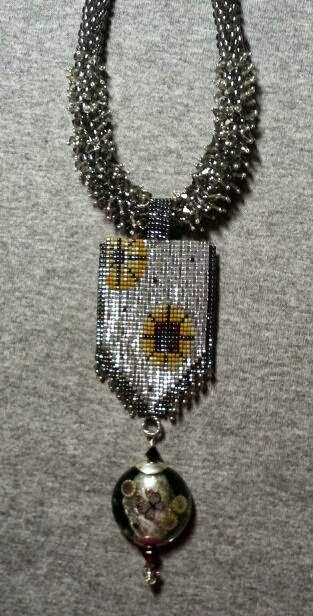 Both of these photos were taken by Barb and used with her kind permission.

And then there was a People's Choice category, which I was surprised to win. I think combining lampwork and seed beads is a big challenge.  Thanks UMBS members!  The voting was blind, with no names on work, but some of my friend's work was recognizable.  :)


Here is my entry, and the Anniversary bead. 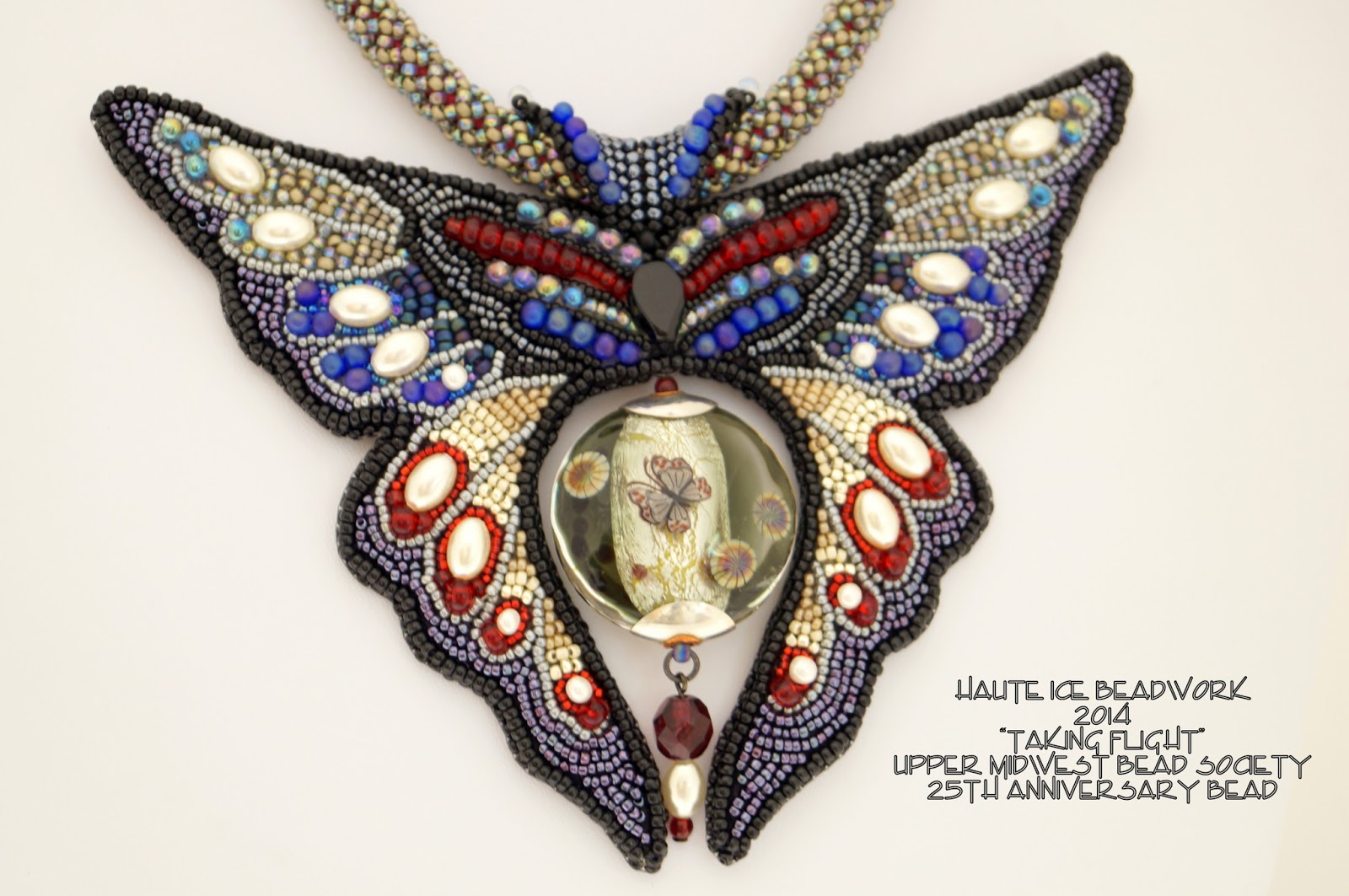 The committee who assembled the event did a fabulous job, with a door prize for each attendee, wonderful food, beautiful table settings, goodie bags, and a super program.  THANKS SO MUCH to everyone who worked so hard to make this all come together and all those who generously gave goodies and door prizes. And Happy 25th Anniversary to the Upper Midwest Bead Society.  You did a GREAT thing Diane Fitzgerald!