A Visit to the Emerald Isle

When the "Destinations" theme was chosen and announced by Jacquie Champion of Etsy Beadweavers, I immediately thought of Ireland.  I am a quarter Irish, and although I am a dreadful traveler, frequently completely undone by motion sickness, if I could go anywhere in the world, Ireland would be my choice.   Add to that, I usually like to make jewelry that suits my mood, and I am always longing for green when March finds Minnesota.   And with St. Patrick's day the big holiday in the month, happening right after our challenge, the deal was sealed.  Shamrocks, shillelaghs, and leprechaun gold! 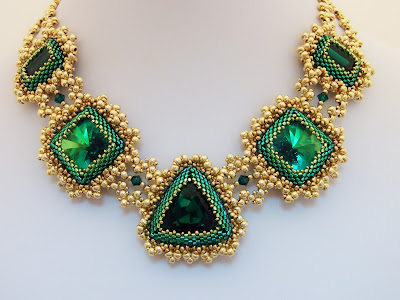 I was also inspired by a book I was reading, The Witching Hour, by Anne Rice. My travel is frequently done in my imagination through books. I knew my necklace would be emerald green for Ireland's beautiful rolling hills and clover, bumpy for the famous buckthorn walking (and fighting!) sticks, and gold, to represent end-of-the-rainbow treasure.  In this book, a Brazilian emerald necklace, vintage late 1600's, is acquired and passed down through 13 generations of female designees to the Mayfair Legacy, and its description became part of my design imagery as well.  It had a heavy gold chain, and ornate gold setting.  So my necklace also represents the "Mayfair Emerald," as well as Ireland.  The Mayfair necklace had only one, large rectangular jewel, but I added more jewels and other shapes. 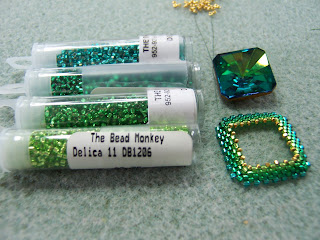 I began with bezels for the beautiful rectangle and triangle Swarovski emerald jewels, and the amazing vintage effect squares I got from my friend Doris Coghill at BeadsbyDee.  In all fairness, much of the magic in the necklace is in the beautiful color in those squares.  I bezeled the jewels in gradated rows of greens in teal, emerald, grass, and peridot.  This is pretty subtle color use, and you may not have consciously noticed it at first glance, but I think this kind of detail really makes a huge difference in the final product, and provides added dimension for the bezel, since the darker, cooler colors recede from the eye and the lighter ones advance toward it.

I did the same sort of thing with the gold beads that I used.  My 15/0 beads are Miyuki 24k gold plate, a deep rich gold. The 11/0 are labeled 4202 Duracoat, (pet peeve! a label that does not tell me what bead I have bought!!!) and also fairly dark and rich.  The 8/0 beads are Toho PF557 Gold Galvanized, which I don't usually like to use because the durability is questionable, (despite the "permanent finish" advertised) but I needed gold beads, and these are what is available.  My personal body chemistry does not strip metal from beads, but I know I am in a minority. The point here is, the bigger beads are a lighter shade of gold than the smaller ones.  This provides lots of added depth and dimension, which may not be noticable without having attention called to it.  See how the beads closer to the bezel are darker?  They really increase visual depth.  Well, that, plus the negative space I left open there, and of course, the bezel ombre, helps too. I was stuck on my frame for a long time.  I added a simple picot. 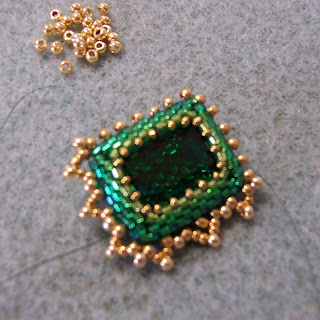 Then I closed it for stability and to create substance and size, and then I was stuck for a while. 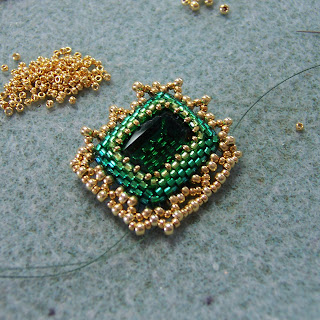 Finally, I began to embellish the frame, aiming for both "bumpy" like the blackthorn Shillelaghs, and "heavy" from my book. The first row thickened the frame, and began adding bumps, which I wanted to look something like granulation. 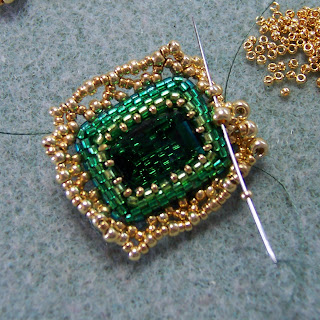 Then, I added a netted picot through that layer. 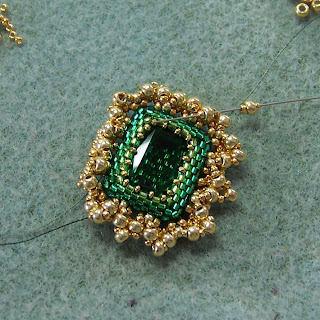 And finally, I felt good about my goals of evoking Ireland, ornate, bumpy, granulation, and late 17th century, portrayed in beads. Then I began a quest for "heavy gold chain" that would still represent all the above characteristics, and relate to the framework I had already created.  I tried spiral, flat spiral, double spiral, embellished RAW, cubic RAW, tried to work out what cubic triangle weave might be (which was pure disaster!) and finally resorted to double stitched flat triangle weave.  I used moss green power pro, and although you can't see it so well in the photos, in person, it lends a kind of antique verdegris shadow to the work, which felt just right to me. 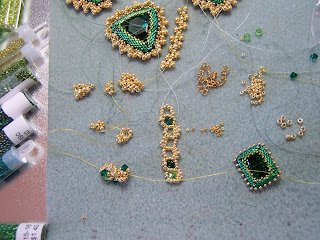 Then I laid out my components and began linking them with the triangle weave chain.  I considered a shamrock configuration, but felt it would be too literal, not pleasing to the eye, plus it denied the vintage jewelry quality I was trying to create. 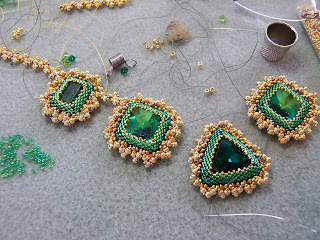 I desperately wanted to add fringe, but in looking at jewelry from the late 1600's and early 1700's,  I saw few fringy components, so managed to restrain myself this time.  But those emerald faceted drops I bought are bound to show up in my work in the near future.  They are just too good to pass over permanently.

Being obsessive compulsive, I also had to finish the backs of my bezels. 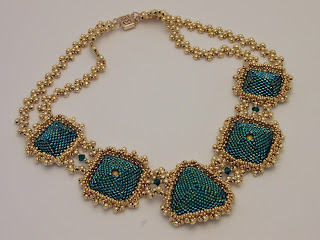 Then I went shopping for a clasp and I must say, I have been spoiled by the fantastic Elegant Elements clasps I have put on my last three projects. Mind you, this clasp is good on the piece, but as I mentioned, I am spoiled!!!  Usually, when I piece is done, I hate to back up, but I would gladly rip this one back for an Elegant Elements clasp.  I've lost the link to the collection, but maybe I'll ask Steven if he's interested.  Neither of my two favorite local bead shops carries Elegant Elements clasps.  SAD!!! 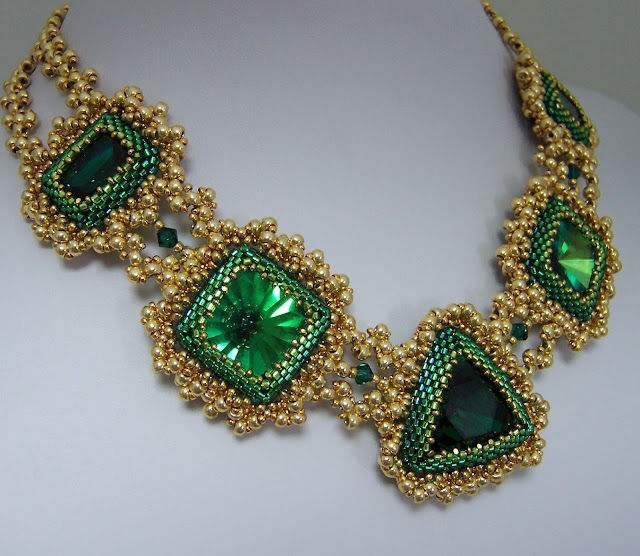