When I visited Steven Weiss and his Beadsmith booth  at the Bead & Button Show, he handed me a few samples of new beads. I admit, I am a traditionalist, and have not messed with many of the new shapes.  But, I finally had time to play with some of them over the last couple weeks.  I have three bracelets to show you, the results of that play.

First, here's the Trinity Bead.  It is a sleek meld of three beads, about equivalent to size 6/0, laid flat, side by side.  I understand there is an infinity bead that is just two lobes, similarly positioned.  And I have a mini version of the Trinity, that looks like an 8/0 size to me.  I have plans for that too, but not enough time yet. 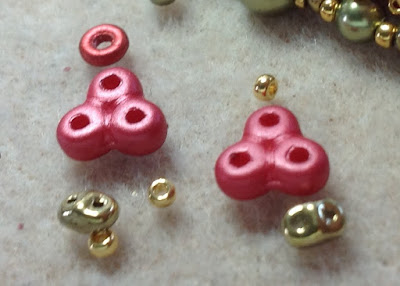 I felt the trick to working with these beads would be in keeping them from becoming rigid when stitching them together. What could be more rigid, strong, inflexible, and structurally stable than a triangle? I fiddled with my needle and thread for a while, and found a happy combination that was very flexible and created my Squiggle Berry Bracelet first. 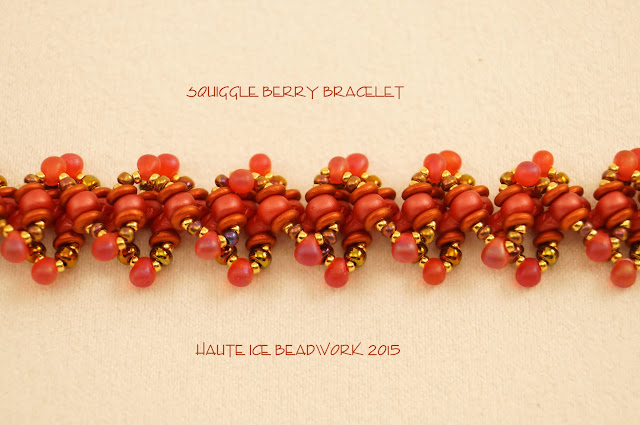 I used the beads diagonally.  Here's a picture of the back of the work. See the layout?  Reminds me of a bicycle chain a bit.  I LOVED the O-beads with Trinities, and used them in each of my projects. 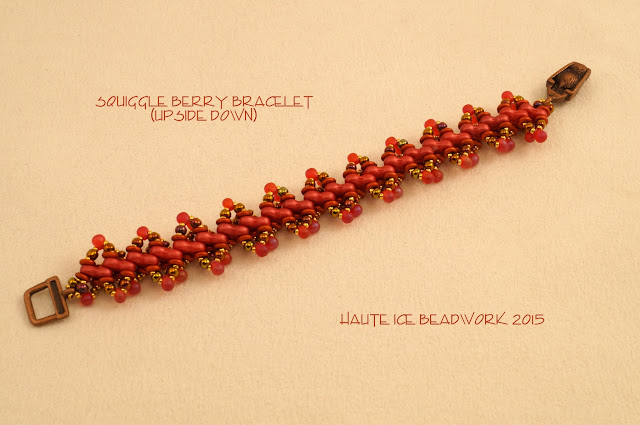 I was really pleased with the flexibility of my weaving, both in terms of wrapping around a wrist comfortably, like little hinges... 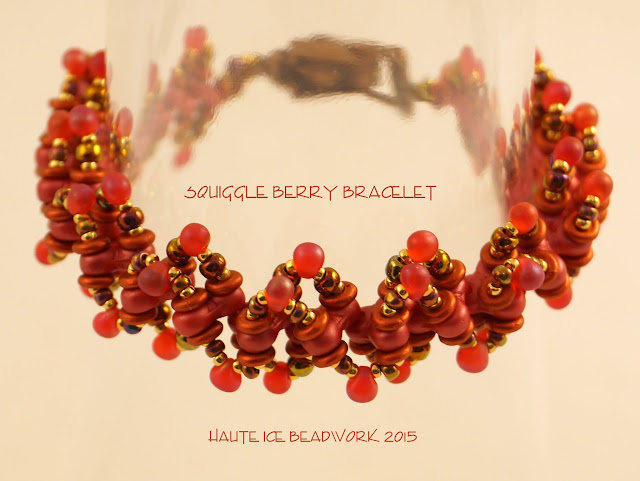 ...and in terms of flexing side to side in movement.  I could even curl it into a circle. 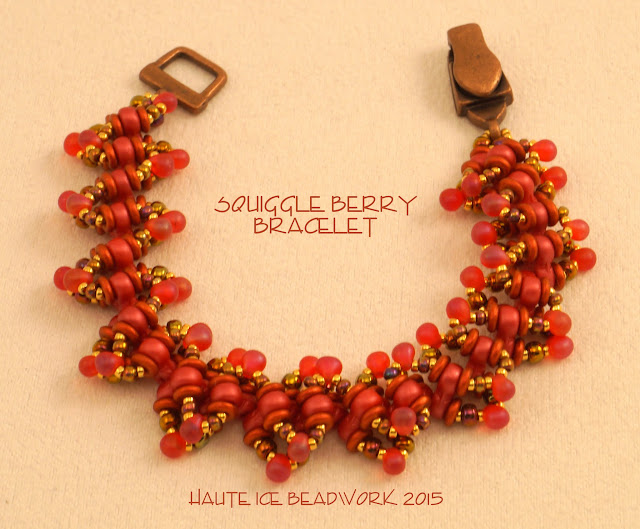 I have been toying with the idea of writing tutorials for real, and of course, this is the first thing I try to imagine illustrating.  Holy freaking cow! Anyhow, I liked this, but I didn't just love it.  And I had just one tiny tube of these little Trinity goodies, so I cut Squiggle Berry apart and played again. Result, being, Big Top Bracelet.

I thought the shiny color-shifting Pyramid Beads, would be nice with the Matte Lava Trinities.  It reminded me of the "When I grow old, I shall wear purple..." poem.  Would this not be great with a red hat?? 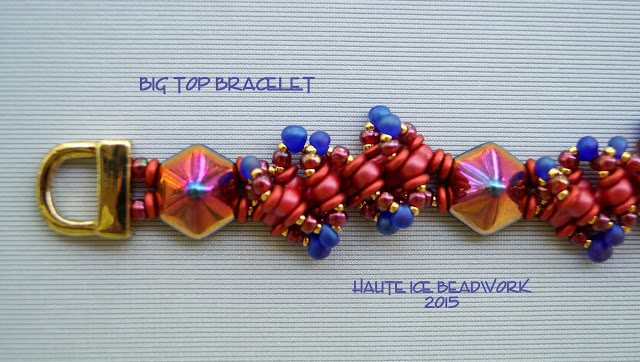 I took a few pictures as a started, but got bored with it, as soon as I made a mistake and had to rip it all back and start over, so I didn't finish.  But the pix I took would let you see the construction, so here they are.  But remember, I MADE A MISTAKE!  Don't make the same one yourself.  Oh, and I happen to really like working with two needles and this complicates everything visually.  But still, I think the images are valuable, and would help me remember what I did, so here goes, with brief instructive words to accompany them. I put on my clasp first. 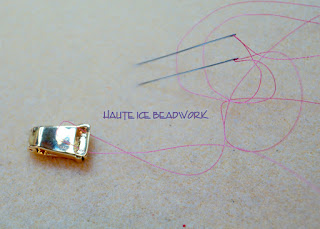 I turned it over and put 11/0 seeds and O-bead washers on each needle, and then a Pyramid.   Distracted by taking pictures, I forgot to put O-bead washer on the far side as I set up the first Trinity, using two bottom holes.  Do not make my mistake.  :)  (Enlarged the photo an noted the mistake) 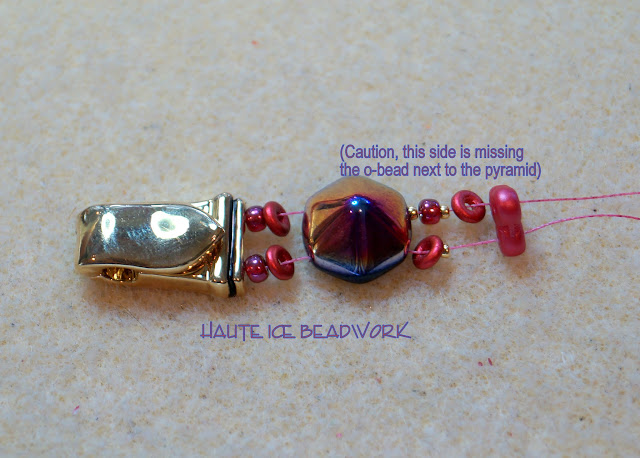 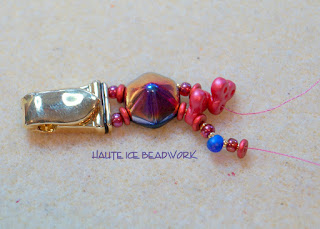 I put the near needle through the far side, and went all the way back to the clasp.  Then I clamped that thread, and tucked the needle into the far left corner of my mat, saving it there for later. 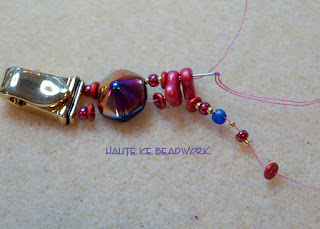 I ran the far needle through the near picot, ran back into the clasp, and came back out on the far side, and through the pyramid. 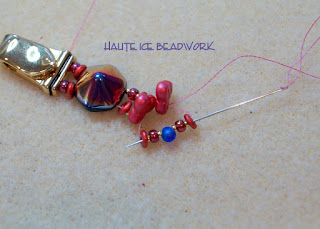 I ran the far thread up to the O-bead and stepped out, adding a picot, sans the first O-bead washer.  That thread then went through the far side second hole in the second Trinity. 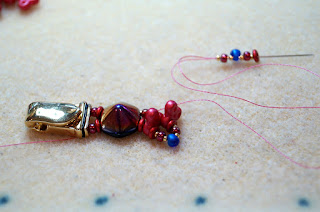 Then to proceed with each additional component, add a Trinity, the O-bead bracketed picot above, and another Trinity, not on my needle, sadly. you can put the needle in any hole of the Trinity beads on this step, but when you draw them up, you must align them correctly. 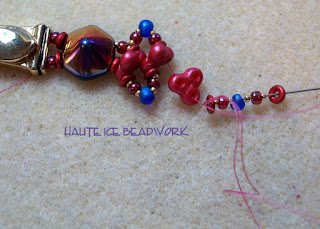 Finally, string and stitch the far picot, and string the next building side. O-bead, Trinity, O-bead bracketed picot series, and another Trinity.  That series, is the basis of the first necklace, and in Big Top, it is interrupted by Pyramid beads every four Trinities.  And the second needle?  It sneaks back into the fray and creates the upper picot series, just like the lower one, but with the smaller drop beads. Not a tutorial, by any means, but hopefully you get the general idea!  :) 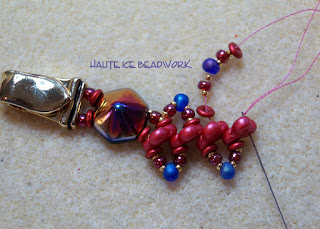 So here is the backside of Big Top, with the structure very visible. You have my permission to play with my idea if you like. Each time I add a Pyramid, I must compensate for the diagonal placement of the Trinity Beads. as I do at the beginning to set up the first one. 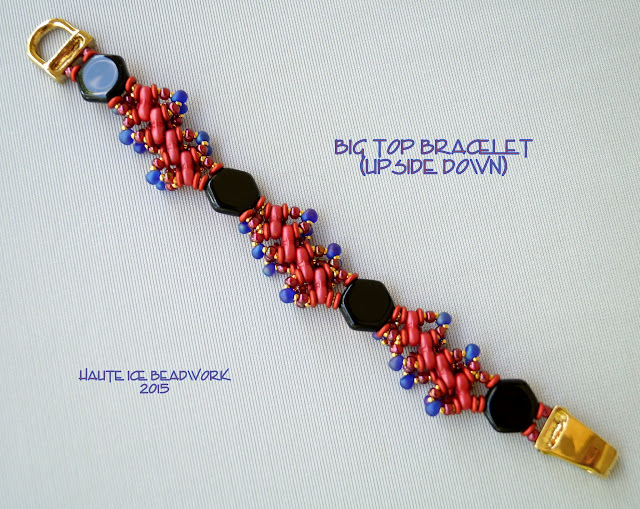 I took this one apart too.  I have this tunic with the red of these Trinities in it, and I wanted to make something fun to wear with it.  Could have been Big Top, but the tunic also has olive green, and no blue,  so snip snip!! Another challenge I gave myself was to use each and every Trinity bead in my work.  Just because.   Here is the result.  I call it Tribal.  Or maybe TriBal. 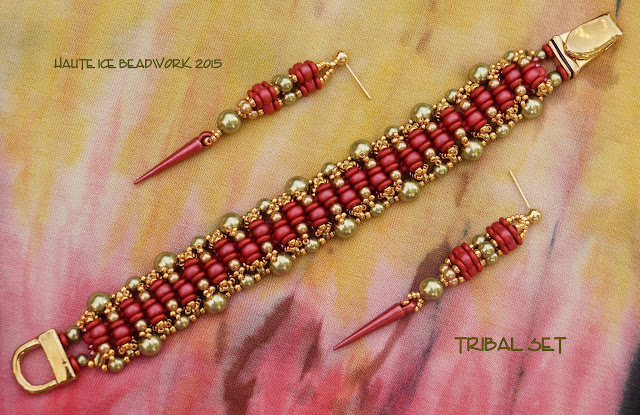 In order to use ALL the beads, I had to make a pair of earrings.  Handy that there were four Trinities left over!  Here's a picture that really illustrates the flexibility of this weave, plus shows you the variation of the structure that I employed. 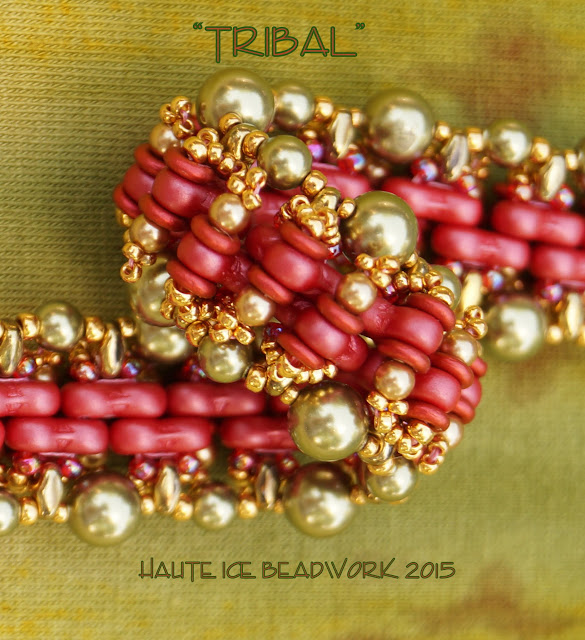 In this weave, I alternate the Trinity beads, instead of using them diagonally.  It feels very snakey, and I love it.  It also employs some mini super duos, which you can see on the back side in these images. 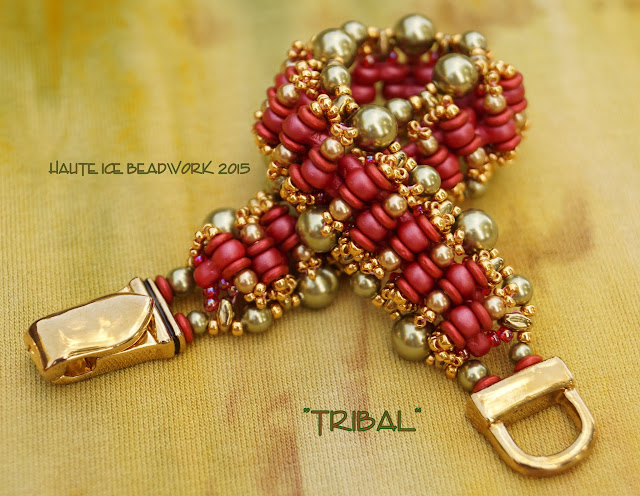 I shot some of these images on the tunic itself, to let you see the color in it. 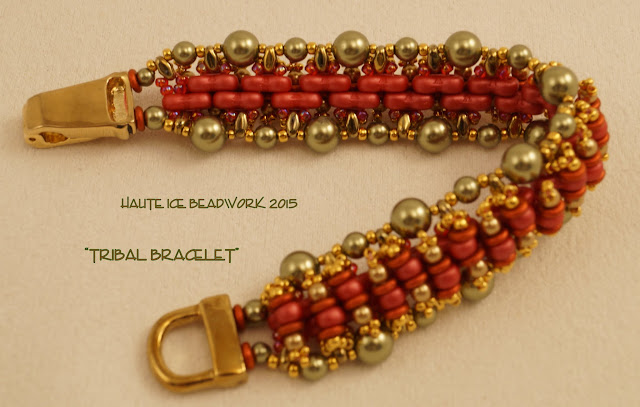 This structure reminds me of a conveyor belt, or maybe escalator treads.  SO supple! 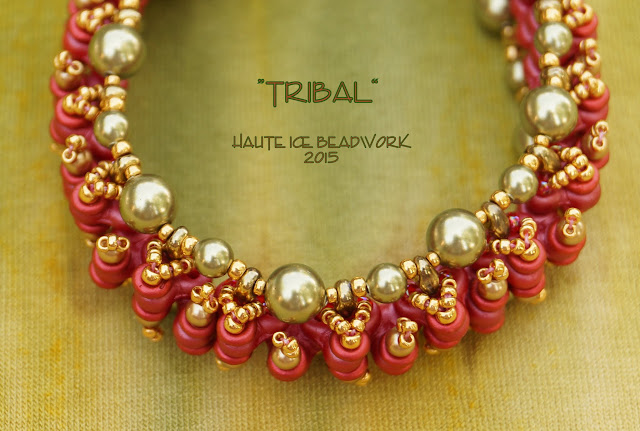 Still two layers of structure in the work, and still, picots as a means to get from one place to another.  I really wanted to fill ALL the holes with my work too! 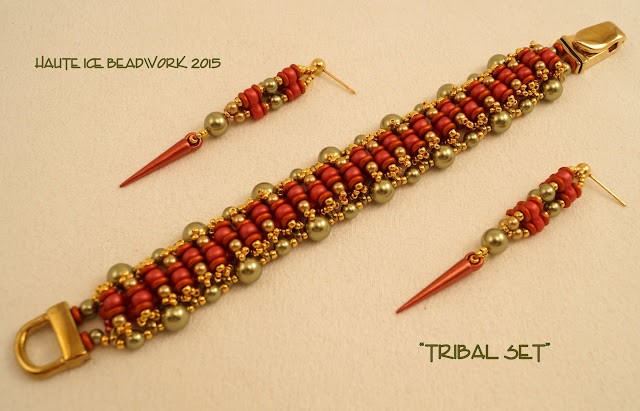 Happy with the earrings too!   I have a necklace plan, but it may have to wait a few weeks until I am back from a little trip to Seattle to accompany our baby as he drives across country to his first job at Amazon.  See you all later, 'gators!!

Ha!  As it turned out, I beaded that necklace instead of packing!!!  I told you I designed the Tribal set for a specific tunic top, which is from Art of Cloth, an addictive designer I love.  I try to buy one item, ON SALE, from each season.  This was last fall. 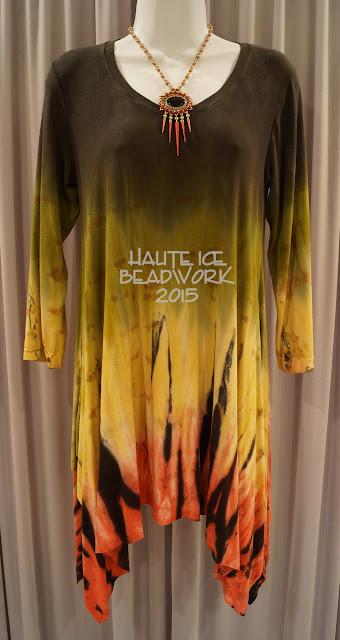 And here is the necklace. 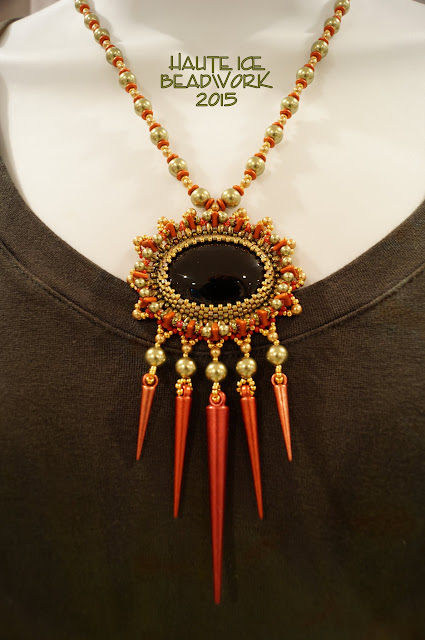 Which features Triangle beads, (like O-beads, but unsurprisingly, triangular) and mini duos.  Plus some funky spikes I bought at my LBS. 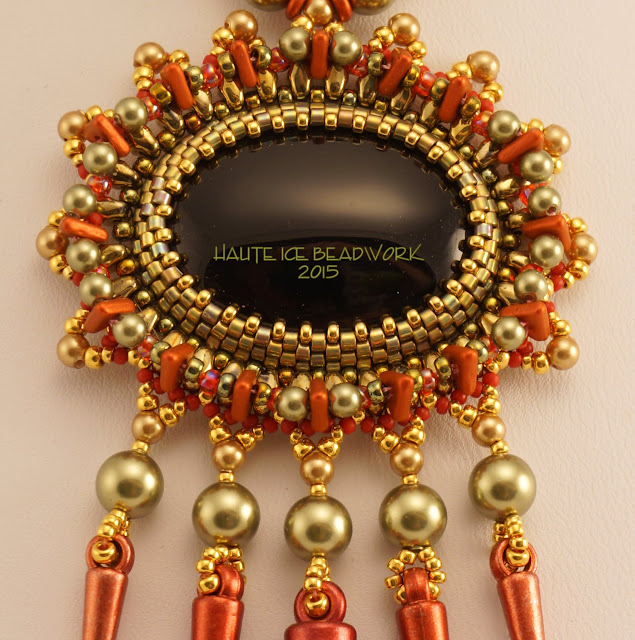 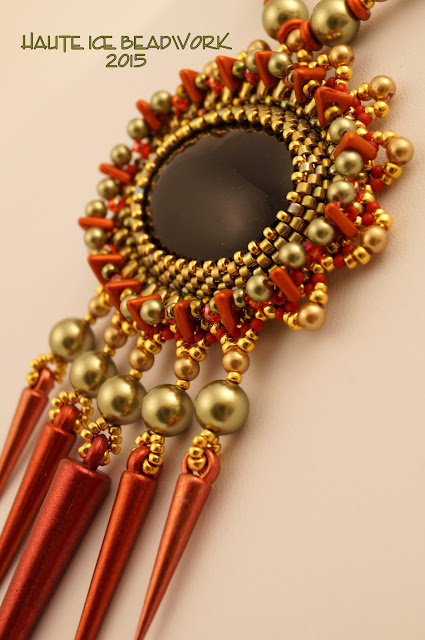 OK, this last bit was posted from the road on some pretty decent hotel wifi!  Hugs to all!
Posted by Marsha Wiest-Hines at Tuesday, August 04, 2015 3 comments: