I am proud to announce that my piece, "Missing" survived the first cut in the 2012 Battle of the Beadsmith International Invitational Beading Tournament on facebook, and of the 80 original entries, it is one of the 40 that will continue to round 2 of adjudication.

When I set out to create my piece, I thought it would be a representation of my home, Minnesota, Land of 10,000 Lakes.   I imagined a work with many bezeled Bermuda Blue rivolis, representing lakes, and lush greenery swirling around those lakes in elegant twists like naturally occuring fibonacci spirals.  I had looked at many examples of fractals in nature and mathematics, and I had a sketch that gave a rough impression of what I was hoping to accomplish.  I hoped to suggest a waterfall, like Minnehaha Falls near my home, as the focal component. 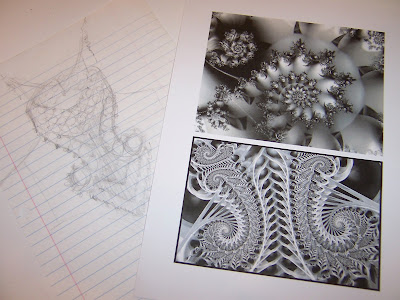 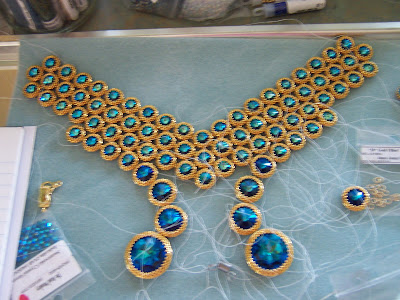 About half way through my project, my mother passed away.  My parents were both very supportive of my artistry, encouraged me to pursure a degree in theater, (when many might have suggested learning to type) and my mother gave me my love of handcrafts, teaching me to knit, crochet, embroider and sew. For Christmas of my Senior year of High School, they gave me a sewing machine.  It was an astonishingly expensive thing, and competely out of line with what Christmas gifts usually were, but it was also a confirmation of their support for my chosen career, and it meant the world to me.
Suddenly, my work was not about Minnesota any more.  It was about my mother, or more important, the absence of my mother.
The lively, curling greenery idea disappeared.  The beautiful blue components rearranged themselves into a soft circle of life, with a smaller supporting outer ring for me, and a larger inner ring for her, which merged into one single line at the base of the focal, as I realized I am now the family matriarch.  The negative space in the center of the focal created a soft heart impression.  Then the waterfall became a curtain of tears, falling from the circle.

The blue was just the perfect color.  My mom's kitchen was always blue.  And I associate her with that room.  She loved to cook and bake, and so many photos of her were taken in that room.  She owned a set of beautiful, cobalt blue dishes.  Let me show you!  These were in the kitchen, but I moved them to the dining room while I prepared the house for sale over the the last month, because I thought they were so beautiful in the china cabinet she was so very proud of. For Mom, preparing and sharing food was an act of love! 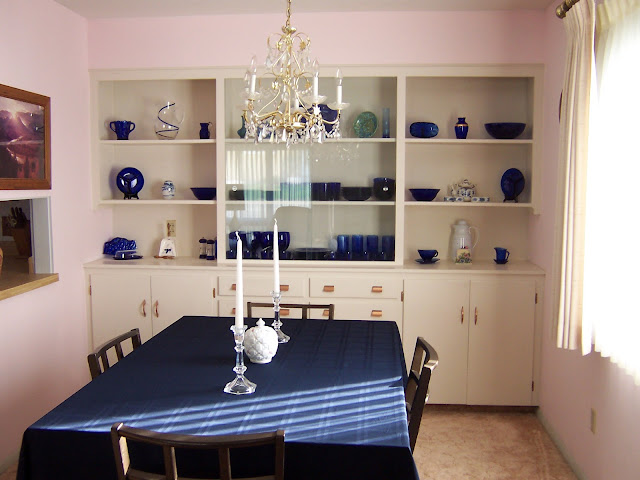 And here's the kitchen. See the blue gingham curtains she made?  The pale aqua figure on the  backsplash tile she chose?  The adjoining wall has paper with a delicate blue figure on it. 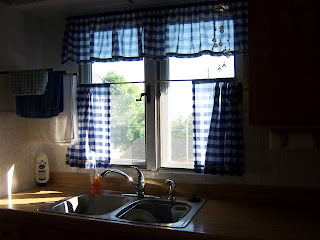 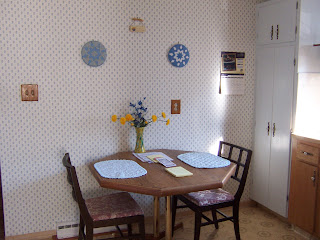 And the dining room chandelier?  Gold, of course.  And there have always been golden yellow accents in the kitchen too.  Mom had beautiful blue eyes as well, but she was legally blind when she began to fall, and the third fracture of her pelvis was just too much to recover from at 89.

I think although it began as something quite different, this is the most personal and deeply felt work I have done as a beader.  I always create with wearability in mind, and have worn each piece I have made at least once.  Initially I din't think this particular piece would get a public wearing.  But I did put it on... and asked The Best Man Ever to take a shot for me.  I also thought I would never sell it, but a time comes to move on through life, and it is now listed in my Etsy shop. 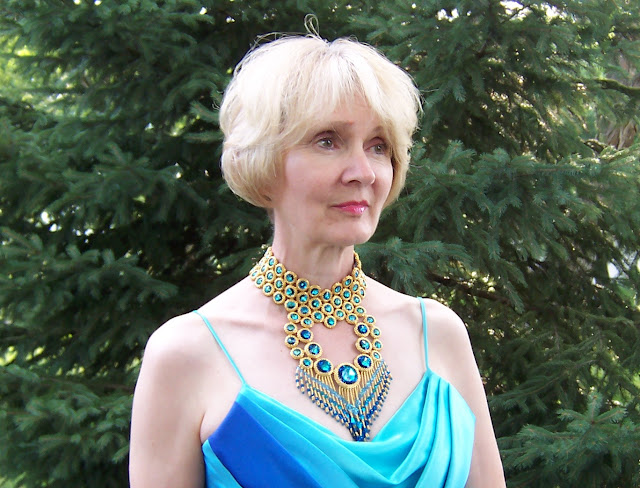 So, there you have it.  A very personal piece, about an empty space in my life.  I tried to make the empty spaces, the negative shapes in the work, (the "missing" bits if you will) speak as loudly as what is there.  I wish I could share it with her.  I think she would approve.
Posted by Marsha Wiest-Hines at Sunday, July 29, 2012 48 comments: I have SOOOOOO much to write about that I hardly know where to begin.  It's been over a month since I have held a beading needle, and the explanation for that will be a separate post.  I have three exciting bits of beady news to share, and I will begin with this one:

I was absolutely over the moon to find that three of my works were included in the new Lark 500 series book, "Showcase 500 Beaded Jewelry."  You can check out the book here:

on amazon and even place your order to see all the really splendid and inspirational work.  Many of my beady friends and heroes were also included, and I am so honored to be in this spectacular publication.

In 2007, when I first discovered beading, it was because of another Lark book.  For my birthday, I was given a book store gift certificate, and a handmade bracelet that was too large for me.  I went to the bookstore to find out how to shorten the bracelet, and next to "Beading for Dummies" was "500 Beaded Objects."  I opened the book, and was instantly hooked, knowing that I wanted to DO that!

Now, 5 years later, I feel like a circle has been completed. I got my copy of this wonderful book in the mail and was totally thrilled to open it and see my work there with the "big boys and girls of beading!"

I will confess, I am not pleased with my photography for the book.  There were myriad requirements, like, "NO EDITING" and "SHOOT IN RAW" and all kinds of things that my photography simply does not approach, and my ancient camera is simply not capable of.  I borrowed my husband's camera, and at least got enough ppi to satisfy the most basic requirements, but just didn't know enough about using this new camera to make my work look its best. I am afraid I rely on being able to crop and adjust exposure to compensate for my lacking photographic skills and when those options are not available, my work really suffers.

I have promised myself that this fall, I will get both a new, state of the art camera, and take a photography class, to learn how to handle the next opportunity when it pops up.  Please feel free to take a look at my work and then chew my backside off over the quality of the photos, and hold me accountable for the new camera and classes!

The pieces chosen for the book were "Bollywood Beauty," "Raindrops on Lilacs," and "Persephone's Return," three of my favorites.  And incidentally, another of my lilac series pieces, "Persian Lilac" is featured in this month's Your Work section of  Bead & Button Magazine.  Happy dancing here in Minnetonka!
Posted by Marsha Wiest-Hines at Saturday, July 28, 2012 9 comments: